Despite the hosts looking more threatening of the two sides
initially, it was Wakefield who found a breakthrough after being awarded a
penalty when their central midfielder was held back inside the box.

However, goalkeeper Tim Edney preserved the Baht’atters
clean sheet by diving down low to his right to deny Wakefield an early
advantage.

The subsequent 20 minutes saw a somewhat cagey affair,
although Will Giles came close to netting after his shot whistled past the
post, and Tom Smith nearly opened the scoring after his lob from close range
barely looped over the bar.

On the half hour mark, Ilkley broke the deadlock thanks to
Harry Brown. George Gomersall beat his defender with a couple of stepovers
before sending a high cross over the keeper to Brown, who headed from close
range to give his side the lead.

Only a few minutes later the visitors saw their deficit
doubled, from another close-range header. Joe Garside delivered a cross towards
the six-yard box, where Smith headed low into the bottom corner.

The Baht’atters won a free-kick only inches away from the
penalty box and Garside, renowned as a free-kick specialist, stepped up to
take. However, his attempt was lofted so high that it flew out of the ground,
earning him ironic cheers from the crowd.

On the stroke of half time, Simon Armstrong’s side won a
penalty of their own. Smith stepped up for his brace and struck the perfect
penalty as his shot rocketed into the top left corner.

Substitute Kevin Gonzalez immediately an impact at the start
of the second half, when he supplied a great cross towards Matt Whitehead,
although the pacey winger could not finish the chance.

At the other end of the field, Wakefield’s no. 14 showed good
skill before aiming a powerful shot on goal, although Edney denied him with a
one-handed save.

Ilkley were starting to add some flair to their game now, as
Matt Whitehead produced a stunning 180 degree turn through the defender’s legs,
but his subsequent cross was some way off the target.

Clearly inspired by Whitehead’s skills, Gomersall performed three
nutmegs on three different players within the space of five seconds. Just like
Garside’s free-kick, this deservedly earned a cheer from the crowd!

Gonzalez bagged his first senior goal in spectacular style for
the Baht’atters, when he backheeled the ball onto the post before smashing home
the rebound, following a well-weighted delivery from Garside.

A couple of minutes later Gonzalez doubled his tally. He
chased down and dispossessed the substitute goalkeeper before slotting into the
empty net.

In the 80th minute, the visitors no. 22 netted a
consolation goal after he received a through ball before blasting his effort
home at the near post.

Determined to make an impact in the final few minutes, substitute
full back Macauley Smith made a darting run from defence before hammering a
long shot.

He came tantalisingly close to registering his first senior
goal, but his speculative attempt smacked the crossbar.

This marked Ilkley’s final mid-season friendly, and they
should take great confidence from their solid defence and threatening attack,
not to mention defeating a highly ambitious Wakefield club, who aspire to
become their city’s first professional club. 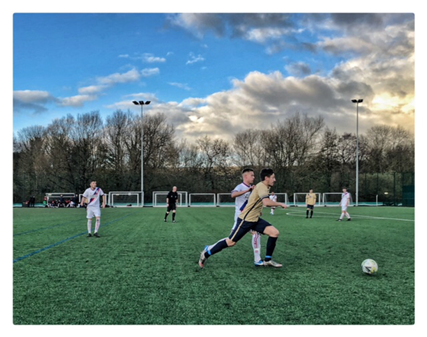