Brace from Tom Fleming enough to see off Horsforth

On a bright Saturday afternoon, Ilkley Town reigned
victorious over a competitive Horsforth side in their first pre-season
friendly, writes Matthew Lambe.

Initially, the game was a cagey affair, with regular swings
in possession and a few half chances.

This continued until the 15th minute when Tom
Fleming broke the deadlock with a well-taken goal. After receiving the ball on
the edge of the box, Fleming deftly turned and slotted the ball into the bottom
opposite corner, ricocheting off the inside of the post on its way.

Fleming’s goal appeared to wake up the visitors, as after
conceding they proceeded to pick up the tempo. During this period, Horsforth
had a couple of noteworthy chances, most noticeably a low cross fizzed into the
box that was brilliantly tipped over by the fingertips of goalkeeper Tim Edney.

Horsforth were rewarded for their efforts though, when their
striker beat the hosts offside trap, and subsequently found himself one on one.
After dribbling into the box, he evaded Edney’s challenge, and placed the ball
into the unguarded net, to tie the game up in the 36th minute.

Ilkley were not without their chances either. Returning signing
Matt Whitehead made his impact as he swung a first-time cross into Tom Smith,
who fooled the opposition by taking a touch, before shooting towards the near
post.

Smith’s goal-bound effort was tantalisingly close to giving the
hosts the lead once again, as his attempt beat the goalkeeper but not the
sliding challenge of the defender. As a result of this, Simon Armstrong’s men
had to settle for being level heading in to half-time.

In the second half, the visitors had more of the possession,
but it was Ilkley who were more resourceful on the ball. Second half substitute
George Gomersall made an impact, as shortly after coming on he started a mazy dribble
that took him past several opponents before he was eventually brought down.
This led to a free kick, which Gomersall chipped into the box, and was met by
Adam Davey, whose low shot forced out a good save from the opposition keeper.

This was later followed by a string of Ilkley attempts from
Smith, Joe Garside and Will Giles, whose header that was destined for the top
corner was well palmed away once again from the keeper.

However, the hosts pressure paid dividends. Tom Fleming
doubled his tally, when in the 77th minute he fired a powerful shot
on goal, beating the keeper at his near post, to give Ilkley the lead once
again.

The last 10 minutes saw end-to-end football where both sides
could have snatched a late goal, but Ilkley held on and picked up the win,
setting their season off to a great start.

A brace from Fleming was enough to earn the victory for the
hosts, and they will hope this win will set the tone for the upcoming season,
with opponents recognising Ilkley as a formidable team. 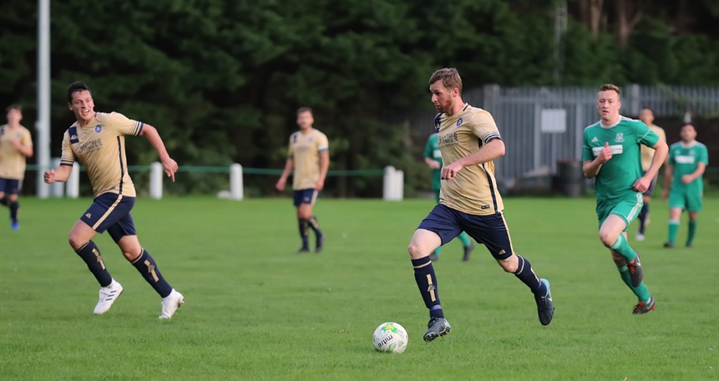