Highlights of the season- Alfie Heaton

Ilkley Town right-back Alfie Heaton chats to Evan Seaman about his highlights of the 2019-20 season and his goals for the following campaign.

Looking back at the 2019/20 season, what was your
highlight of the campaign?

There have been a lot of good moments and I’m sure there
would have been a lot more still to come. If I had to pinpoint one, it would
probably be our win away against Horsforth St Margaret’s in the cup. To go 1-0
down quite early on against a really good side, we showed a lot of character
and quality to win the game 4-1.

Have you managed to settle into the squad well, being the
youngest player in the team?

The lads are all top class and have been really welcoming so
I don’t think I could have settled in any better. Everyone has backed each
other from the start and it’s an enjoyable place to be. I’ve had some good
advice from the more experienced boys along the way as well, which has helped
because I still have a lot to learn.

Despite the season ending abruptly, are you pleased with
your individual performances and team performance this year?

Definitely. The most important thing is how well we’ve
played as a team. Being on course for the most successful season in the club’s
history is something that the whole squad are really proud of. It’s just so
disappointing for the season to be ended so soon, being second in the league
and still in all 3 cup competitions. In terms of my own performance, to come
away in double figures for assists, and to have played almost every game is
something I’m really happy with.

Do you think the club have developed on and off the pitch
over the past season?

100%. Everyone can see what a positive place Ilkley Town is
to be. Everything is moving in the right direction for the club to keep growing,
and the facilities that have been completed in the last year are proof of that.
The commitment that’s been shown by everyone throughout the club to allow this
progress to occur has been second to none, and there are a lot of people who
deserve huge credit for that.

Who would you say is your player of the season?

The squad’s been really strong this season, with lots of
depth and competition for places. I don’t think there’s really been anyone who
hasn’t played well, and you couldn’t argue for our player of the season. That
being said, it’s difficult to ignore someone who’s scored 30 goals in 26 games
- even if they were 20 tap-ins and 10 penalties.

And finally, what are your aims for next season?

To score a goal! And to be better than this season. Both
individually and collectively as a group. We have to keep improving, and whether
that’s at this level again or at Step 6 we’ll have to wait and see. 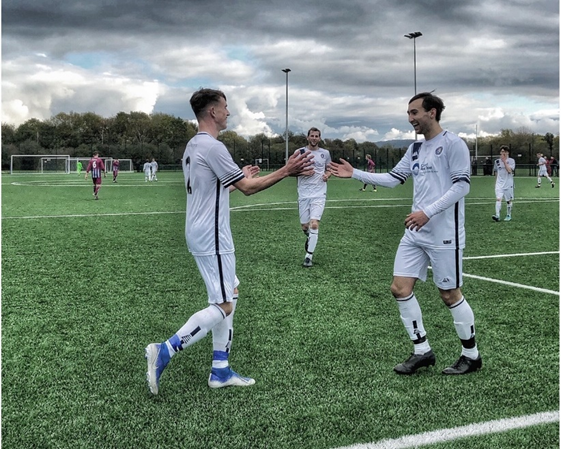