Evan Seaman chats to Ilkley's George Gomersall about his time in the Guiseley AFC Academy and his spell at Ilkley Town so far.

You have previously been on the books at Guiseley AFC.
What was your spell at the National League North side like?

My time at Guiseley was enjoyable. It had its ups and downs but,
on the whole, it was a good experience and a massive learning curve. I joined
Guiseley Academy at 16 years old and had 2 years there. In my first year, I was
not in the academy team regularly, so I actually came down to Ilkley at 16
years old to get some game time and thoroughly enjoyed my first spell here. It
was the first time I’d played men’s open age football and it changed the way I
played as it was much more physical than what I was used to and the pitches at
times, were very difficult to play on. Simon was still playing then so I know
Si as a player and a manager. In my second year at the academy, I got into the
team in pre-season and stayed there pretty much for the whole year and had a
great year, I was voted Players player of the year that season. At the end of
that season, I signed my first contract with them and was sent out on loan to
Goole AFC and Brighouse Town.

That season that I was on loan at the two clubs was another
huge learning curve and difficult at times, but I enjoyed it, nevertheless. The
next pre-season, the new manager had just come in at Guiseley and asked me to
come down for pre-season, I was able to play against Bradford City in a
pre-season friendly, like I had the previous year but unfortunately I got
injured and the manager told me my contract wasn’t going to be renewed which
was disappointing but that’s just part of football at the end of the day.
Overall, my time at Guiseley, in the Academy and the 1st Team made me into the
player I am today and provided me with some great opportunities such as playing
against Bradford City, Leeds United and being able to play with and against
some top players who have been very successful in the game.

Did playing in Guiseley’s academy help you to improve as
a player?

Guiseley Academy definitely improved me as a player. The
coaches there helped me recognise what my strengths were and what I needed to
improve to get to that next level. It is a great setup down at Guiseley with
some really great people involved in the club and the Academy. I would have
never been given a chance in the First Team without the help of the guys down
at the Academy.

You are currently playing as a midfielder for Ilkley Town
AFC. Have you enjoyed playing for the club so far?

It is my second spell here and I am thoroughly enjoying
every part of being involved with the club. We have got a fantastic squad with
brilliant coaches and the set up and facilities we have got at the club are top
class and rarely seen at this level. Being around the coaches who have a lot of
knowledge of football and players who want to learn and improve in every
session and game is great. It pushes you to raise your standards and also
demand more from the people around you. We are a very hungry group of players
and we want to be successful and I believe we have got everything we need to be
able to be that.

Last season you were Ilkley’s fourth highest goal scorer
with 6 in 11 appearances. Are you hoping to continue this going into next season?

Last season was a strange one for me personally, I had a
decent pre-season and started well in the league but then an old injury came
back and kept me out for 4/5 months which was frustrating but that’s something
you have to deal with and I was able to come back that same season and play
some games and did okay and got a couple of goals. Obviously, the team was
having a brilliant season last season, so it was great to come back into the
squad and see the lads buzzing and I was just happy to be back. I am really
looking forward to this season. I think our squad has improved, there is so
much competition for places and things have been put in place off the pitch
which also allow us to perform the best we can and allow us to reach the levels
we need to reach in order to have another successful season.

Last campaign your team were on course to be promoted
until it was cut short. Are you confident that they can go one step further
next time and become a semi-professional club?

I have no doubt that we can get promoted this year, this
group of players and the management team have always been determined to improve
and be successful and this season is no different.

Last Saturday you started in the pre-season friendly against
Hessle where Ilkley won 8-0. Does this give you momentum that the team can keep
improving?

All pre-seasons friendlies help the squad and
Saturday was no different. It was a good chance to see where we are all at
fitness wise. Hopefully, we can carry on getting some good results and it will
give us the momentum we need to go into the league season. 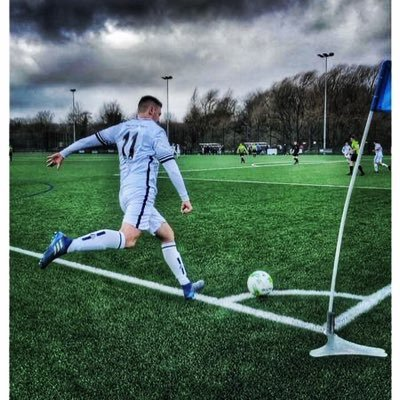