Evan Seaman chats to Ilkley's Dave Houlston about what he's achieved with the club since joining in 1996 and his time in Canada.

You currently work as a coach at Ilkley Town AFC. What has your
time at the club been like so far?

I’ve been coaching and managing at Ilkley since 1996 when I
inherited the U15s as the previous coaches resigned mid-season and I was a
‘willing parent’ who stepped-in with two other dads, David Crowther and John
Beaumont, so it’s been a long journey. At the time, I was also Director of
Excellence/Academy Director at Leeds United, so it was quite a contrast. It was
a different set-up in the mid-1990s with only a handful of Ilkley Juniors boys’
teams that were separate from the men’s Ilkley AFC. With the exception of a
‘fallow-period’ for a few seasons in the ‘Noughties’, my time at the club has
been enjoyable and relatively successful, and I’ve been fortunate to have
coached some high quality players, with the current squad containing
potentially the most talented collection of players.

You are one of the longest serving people at the football club.
How do you think the club has developed on and off the pitch over the last two
decades?

I gravitated into managing and coaching the Senior team in 1999
when our current Chairman Richard Giles was one of the regular players and I
saw a gradual improvement in the quantity and quality of players as we
progressed from the Harrogate League into the West Yorkshire League in 2004. We
played at West Holmes fields in Ilkley with decrepit changing facilities and
had to rope-off the pitch before each game before departing for a range of
local hostelries for post-match refreshments. We practiced wherever we could
find a space outdoors or indoors. Of the current players, I suspect only James
Hirst, Adam Davey and Daz Munday recall these early days before we joined the BRSC
in 2008.

The club has made dramatic strides forwards in size, scope, and
facilities in the past decade, largely due to the drive and vision of many
people associated with the club. The involvement of Simon Armstrong and
latterly Sam Dexter has had a particularly significant impact on the Senior
team, with the development in facilities, resources, and the subsequent
attraction of better players. There is a vibrancy across the club as we all
look forward to the next decade of growth.

In the 2002-03 campaign Ilkley Town won the League and Cup double
in the Harrogate Senior League. Was it pleasing to be a part of the club at
such a successful time?

The 2002-03 season brings back fond memories and was the
springboard for our elevation to the West Yorkshire League. We had some
excellent players at the time and became the first team to win promotion in its
initial season in the league. Thankfully and perhaps unusually in football,
there have been far more highs than lows for the Senior section of the club
over the past two decades, with promotions and Wharfedale Cup victories being
particular highlights.

Last season the club finished second in the West Yorkshire Premier
Division, which was their highest ever league position. What are your thoughts
on the current squad?

The 2019-2020 and current squad of players are the best collection
of players I have seen at the club. There have been some exceptional players
during my time in the club, but I feel the current squad is of a higher standard
than any of those in the past. It is also pleasing to see the competition for
places grow and how important it is for players to push themselves to be as
good as they can be.

Are you hopeful that you can take the team one step further next
time and get them promoted to the tenth tier?

I am confident this will happen once the facility base is up to
standard and it is something I’ve been looking forward to as a coach for many
seasons. The challenge for all of us is to be even better in 2020-21 than we
were last season. I am pleased to remain involved and thankful that I now focus
on coaching and leave the day-to-day management to Simon and Sam (been there,
done that for 15 years!).

You have also previously studied at Dalhousie University in
Canada. What was your experience like there?

You have been doing your research and Canada was over 40 years
ago! I went to pursue post-grad studies with football being very embryonic in
North America at the time. The standard was moderate at best, but it did give
me the chance of my first coaching role as University coach in 1977-78. I
maintain contact with friends in Nova Scotia and we played the University at
the Grammar School fields when it had a UK trip in 2006. 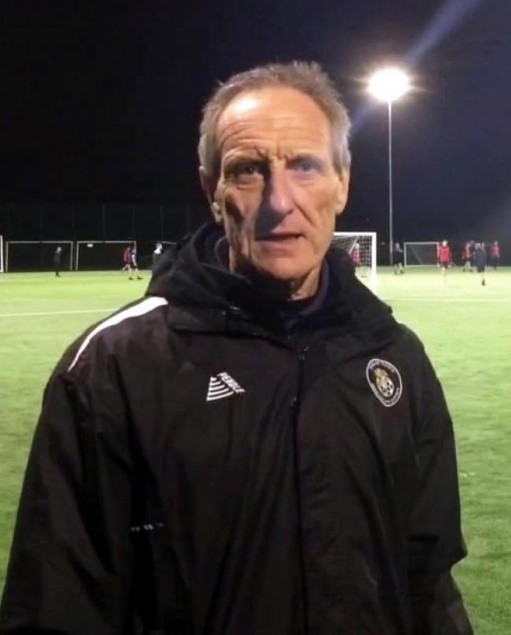