In the first friendly since the resumption of football,
Ilkley Town AFC took a convincing win over the Ilkley Town Reserves on a
Wednesday night, writes Matthew Lambe.

The Reserves found themselves off to a flyer after breaking
the deadlock in only the 5th minute. Kieran Donohue latched onto a
well-weighted through ball, before blasting his shot into the bottom left
corner.

Continuing to pile on the pressure, the Reserves would have
doubled their lead had it not been for the crossbar. Kevin Gonzalez fired a
shot from range, but the ball smacked against the crossbar and back into open
play.

The Firsts were quick to draw the game level, when in the 15th
minute George Gomersall found the back of the net. After controlling the ball
on the edge of the box, he turned and rifled the ball into the top corner.

A second goal in quick succession for the Firsts gave them
the lead, when a one-handed save from keeper Mike Clifford fell to the feet of
Alfie Heaton, who tucked home the rebound.

Harry Brown added his name to the scoresheet, giving the
Firsts a two-goal cushion. He slid the ball home after finding himself on the
receiving end of a low cross from Gomersall.

On the stroke of half time, Simon Armstrong’s side added a
fourth, this time courtesy of Gomersall. He chased down a superb through ball
from Brown, before shooting across goal to register his second of the match.

In the 65th minute, Brown netted for the second
time, increasing the score line to 5-1. Spotting the keeper off his line, Brown
attempted an audacious chip, and his effort looped over the keeper and dipped
under the crossbar.

Not resting on their laurels, the Firsts registered a sixth
in bizarre fashion. Substitute Ben Atkinson aimed a shot destined for the top
corner, but it was brilliantly tipped onto the bar by Clifford. However, the
backspin on the ball from the crossbar caused it to bounce back across the
line.

Ben Atkinson doubled his tally only a few minutes later,
when his powerful close-range attempt snook in at the near post.

Despite this, the Reserves continued to threaten the Firsts,
and had plenty of goal bound attempts. A neat lay-off pass from Donohue left
Josh Rowland in space to score, and he would have pulled a goal back had it not
been for the safe hands of Adam Montague Millar.

In the final few minutes, substitute striker Joe Chilaka added one final goal
for Armstrong’s side. After winning possession in the opposition half, he drove
forward, and his shot nestled in the bottom corner.

This result showed the Firsts that they are certainly ready
for the return of the West Yorkshire Premier League, whilst despite the score
line a strong performance from the Reserves should still give them confidence
for the West Yorkshire Alliance League. 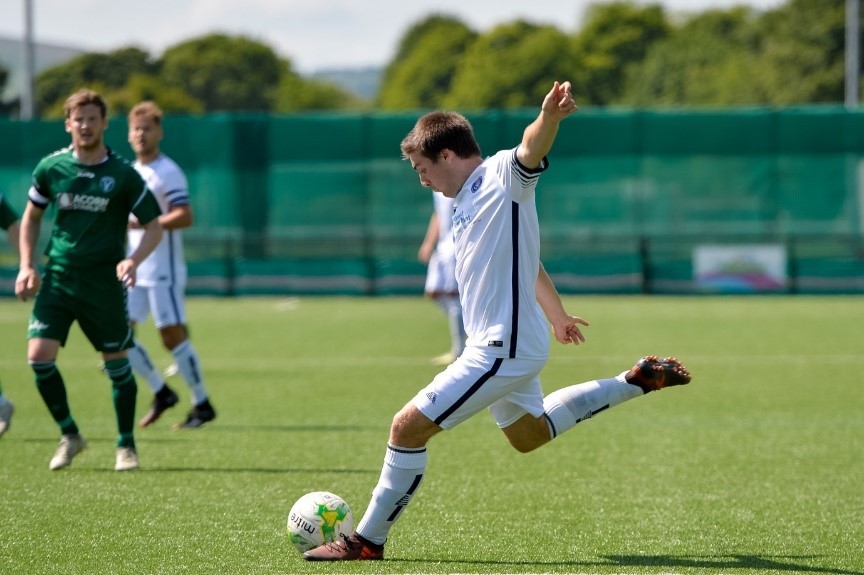