Evan Seaman chats to Ilkley's assistant and u'23's manager, Sam Dexter, about his time as a Leeds United coach and his role at Ilkley.

You were a coach at Leeds United from 2001 to 2009. What
was it like to have the opportunity to work at such a big club?

In all honesty it was incredible. I was only 17 at the time
I started, I went to Leeds Utd for a couple of weeks on work experience when I
was completing my coaching qualifications at college. After the two weeks ended,
I volunteered to work for free for a whole year to keep my foot in the door. As
soon as I was qualified, they offered to keep me and a couple of other lads on
to work in their community scheme and from there we progressed to working at
the academy. At the time I started, Leeds were an established Premier League
Club and were flying high in the Champions league so there was constant
excitement around the club. I absolutely loved it.

Were you able to gain a wealth of experience in coaching with
several high-profile names in the academy at the time such as future England
players James Milner and Fabian Delph?

When I think back to those days it was my coaching
apprenticeship. There were some fantastic coaches there at the time such as
Dave Harrison who is now head of recruitment at Manchester United, Lee Sinnott,
Sean Constable, Steve Holmes and John Francis who have all had very successful coaching
careers in the game. I used to listen, watch or assist in their sessions
whenever I could and absorb as much information as possible, I was like a
sponge and would try and pick their brains at any chance I could get. They were
all great guys and would give up their time to help young coaches such as
myself, I learnt so much from all of them.

I seem to remember coaching our 30 goal - top scorer Tom
Smith when he was at Leeds as an 8-year-old! He still had the same haircut back
then!

At Ilkley Town AFC, the team unable to complete the rest
of last season and are currently unable to train, what have the management team
been doing to keep themselves occupied in these uncertain times?

The main focus for the management team has been to keep in
regular contact with the players, staying together as a group and hoping that they
and their families are staying safe and well during this difficult period. We
are also planning accordingly for the new season. We would have been planning
at this time of the year anyway, so in that sense nothing has changed, there is
just the uncertainty hanging over us of when we will be able to start. We have
set the players weekly strava challenges and a strength and conditioning
program to keep them ticking over and the effort the players have put in has
been first class. We have also arranged some pre-season friendlies and
identified some players we would like to bring in when we eventually get
started. The fun never stops!

Are you pleased with the club’s player recruitment so far
in preparation for the following season?

Absolutely, there are still one or two loose ends that we
would like to tie up but overall, we are really happy with everything so far.

Do you think the return of Joe Garside from LA Galaxy and
Matt Whitehead from Harrogate Railway Athletic will help to strengthen the team
after gaining experience at higher profile clubs?

Yes definitely, both players have their own individual
qualities that can only help improve the squad and it is great to have them
back with us. Both Joe and Matty and have been at Ilkley for lengthy periods before
and know what our expectations are. Will Giles is another fantastic addition,
giving some healthy competition in the right back spot, I am excited to see him
play. Matty will have learnt a lot from his time with Harrogate Railway and it
is important that he passes this knowledge on to the rest of the players. At
the end of the day, the squad is very strong, and every player will have to
work extremely hard to cement their spot. It is all extremely exciting.

Do you think there are still any areas of the pitch which
the team need to improve on?

Absolutely. The players make fun of me because, apparently,
I whinge and moan all the time, but it is only because I’m passionate, I care
about them and we want them to do as well as possible.

We have developed a specific way of playing that we aim to
adopt throughout the senior section of the club and so it is important that we
keep evolving so we do not become predictable and ultimately, stale. To sit
back, be content with what we have and be comfortable is very dangerous in my
opinion. It is paramount that we keep our feet on the ground, keep pushing and
driving the players to improve, but more importantly for ourselves as a
management team to improve. We constantly ask ourselves, what can we do better?
How can we improve the playing experience at Ilkley? We want to make Ilkley as
attractive as possible so that players want to come and play here. So much hard
work has gone on off the pitch at the club to develop the facilities etc and so
we have a responsibility to the club to drive those high standards on it.

How have you found your role as assistant manager at
Ilkley Town AFC so far?

I have loved and appreciated every minute. When Simon asked
me to be his assistant two years ago it took me 0.5 seconds to say yes! I
jumped at the opportunity. Simon has created an extremely committed, professional,
and experienced management team and we all bring different qualities to the
table. The assistant manager of a team is quite a unique role and requires a
certain skill set that I think suits me. The role allows me to still be quite
close to the players, coach them, and mediate between them and the manager in
some situations, but Simon also asks for my opinion regarding the team so it is
the best of both worlds. The experience I have gained working alongside Simon
and Dave Houlston has been immeasurable and I have really enjoyed taking the
team whenever Simon has been absent, so it is a perfect fit for me.

What was the hardest challenge the team has had to face last
season and how have you overcome that challenge?

Well 2 floods on the 4G and a corona virus is a decent
start!

In all seriousness, various challenges present themselves
throughout the season. Where I think Simon has done a fantastic job is by
keeping 25 players happy! There has been certain times throughout the season
whereby certain players have not been very happy because they have had to sit
on the bench for 5 or six weeks whilst the team has been winning, which isn’t
easy to do when all you want to do is play. Simon manages the group extremely
well and all the players are treated equally, respectfully and they all know
where they stand. Making the players buy into the importance of the whole squad
and not making it about the individual is always a constant challenge.

How will the team look to build on their highest ever
league position next year? And what do you personally plan to achieve next
season?

As always, the plan is to improve, on the pitch and off it.
Every year we set the squad goals for the coming season and next year will be
no different. The main goal is always to improve our points total, to score
more and to concede less which are three very simple targets. We have achieved
this every year so far. Because we finished second when the league ended that
must mean that our goal is to challenge for the league next year, it has to be.

And finally, as manager of the u’23’s at Ilkley, what are
your plans for the team and what do you hope to achieve this year?

The continuous goal for the u’23’s is to develop players and
create a platform for them which will ultimately give them the opportunity to
play for the first team. 12 players from the u’23 squad made appearances for
the first team last season which I think is a fantastic achievement. The
standard of the u’23 league is extremely high, with the likes of Harrogate
Town, Farsley Celtic and Tadcaster Albion amongst the clubs involved. We are by
far the smallest club in terms of stature in the league, but we have competed
really well this season and the experience our young players will have gained
from playing against those clubs is invaluable. Most of our players are aged
between 17-20 and I am really pleased with how they have all performed this
season. Our plan is to also add a u’21 side next season which will give even
more opportunities to young local players who want to progress with us. We cannot
wait to get going. 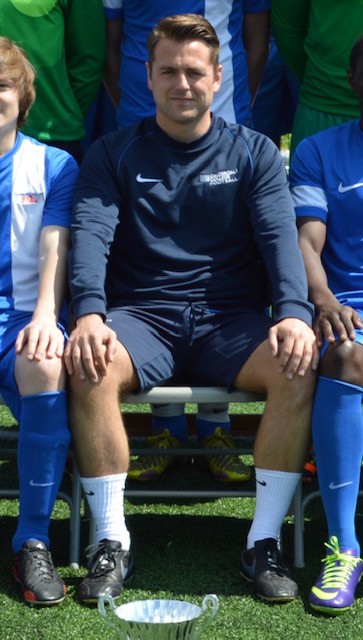