Evan Seaman chats to the Manager's Player of the Year for the 2018/19 season, Nicc Hewitt, as he talks about his return from injury and his experience being chosen to play in the WYAFL Representative squad.

So, as you prepare to return to the starting eleven following
a lengthy spell on the side-lines due to an ACL injury, are you excited to be
able to play for Ilkley again when the new season begins?

Yes, I am very much looking forward to it. I have a little
while to go just yet before I am able to be back playing again but I can’t
wait.

How tough has it been not being able to help the club to develop
further on the pitch?

It has been very tough actually. Although, the guys have
tried to keep me involved you do feel out of it when you are not playing. I
have been grateful to Sam for asking me to help with the U23’s which has helped
a lot.

During your rehabilitation period are you still pleased with
how Ilkley have performed over the course of the 2019-20 season?

Yes, very pleased. We were on course to have a successful
campaign so it is a shame that the season has been cancelled but hopefully we
will be able to better it next season.

Do you think it will take a few games to get your match
sharpness back, or are you raring to go already?

I will not be back until December/ January time, but I am
hoping I will be able to train before then to get my fitness back up to
required. Then I think it will take me 3 or 4 games to get back up to speed
with everything.

Are you looking forward to trying to get the team
promoted to semi-professional level next campaign?

Yes, since joining the club a couple of years ago, the
committee have had a clear plan to try get the club to the next level which
they have achieved successfully off the pitch, so we need to make sure we do
the best we can.

Do you think the return of other key players such as Matt
Whitehead and Joe Garside will help to strengthen the squad?

Definitely. Matty and Joe are very good players and it was a
shame to see them both go so their return will make the squad stronger. There
is definitely going to be competition for places at right back.

Back in September last year you were one of Ilkley’s
players, alongside Harry Brown and Tom Fleming, to be chosen to play in the
WYAFL Representative squad that beat NCEFL Premier Division opponents Athersley
Recreation FC 5-0. How much of a privilege was it to be chosen to represent the
West Yorkshire Association Football League?

Yes, it was very nice to be selected in the squad and I
managed to start in the win over the Manchester FA which was a great
experience. It definitely helped me with having Harry & Flem in the squad also.

In your last full season at Ilkley you managed to score
six goals Ilkley in 37 appearances. As a midfielder, are you hoping to have the
same kind of impact on the team in your return?

Yes, my first aim is to get back playing and in the starting
11 and if I can do that then I can hopefully chip in with a few goals too. 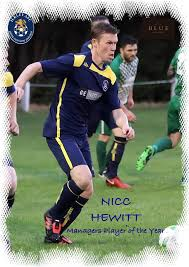