In the final game of the calendar year for Ilkley Town AFC,
they continued their season-long unbeaten streak with a victory against a
competitive Horbury side, writes Matthew Lambe.

The opening period was a relatively cagey affair, with
midfield possession being a key factor, although neither side could find a
breakthrough.

However, the hosts broke the deadlock in the 25th
minute, courtesy of a Tom Smith penalty. Simon Armstrong’s side were awarded a
penalty when a cross from Harry Brown struck a defensive hand on the edge of
the box. Smith made no mistakes with his penalty, despite Horbury keeper Tom
Padgett diving the right way.

At the other end of the MPM Stadium, Tim Edney was called
into action to save a free kick swerving towards the top corner.

The Baht’atters only held their lead for 10 minutes before
the visitors levelled the scoring. From a looping corner, Bobby Evans rose
highest to head the ball home for Horbury.

On the stroke of half time, Ilkley were punished once again.
Edney denied a good effort from striker Gibril Bojang, but the ball fell to
Kieran Stevenson, who was free to lob from close range.

Despite seeing most possession, the hosts found themselves
behind 2-1 at the break.

Keen to pull back the deficit, Ilkley pressed forwards
immediately in the second half, and were rewarded with an equaliser in the 50th
minute. Captain Richard Bull received a neat lay off pass, before slotting the
ball home via a slight deflection.

Capitalising on their momentum, the Baht’atters were back
level only 15 minutes later. A low free kick from Joe Garside was deflected and
the following shot from Bull was deflected too, causing the ball to bounce
unchallenged in the six-yard box.

Smith’s striker instincts kicked in, meaning he was the
first to pounce on the loose ball and slid his attempt just beyond the reach of
the keeper for his second of the game.

This was subsequently followed by a flurry of attempts from
Ilkley, including a close-range header that bounced off the inside of the post,
and an attempt from Smith assisted with a through ball by Tom Fleming.

Horbury continued to pose a threat in attack however,
although hopes of a comeback were dashed when defender Ben Parkinson received a
second yellow card for a tactical foul on Brown.

In the final few minutes, Kevin Gonzalez nearly sealed the
result for the hosts. He made a darting run through the centre of the field
before his rocketed shot smashed off the crossbar.

This result concludes a successful year for the Baht’atters,
and a superb record this season ensures they will be top at Christmas. 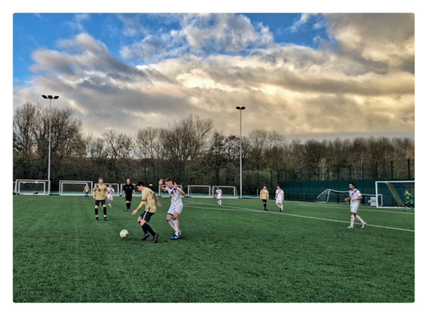