Stunning Second Half sees Ilkley advance in the Cup

Carlton showed more promise in the opening minutes of the match, maximising their high press strategy to its full potential. They caused Ilkley to make unnecessary mistakes and were rewarded for their efforts with a goal in the 15th minute. From the left wing, Carlton’s Charlie Thompson received a pass from Harvey Walker, and cut inside before floating the ball into the roof of the net, beyond the outstretched hand of Adam Montague Millar.

Carlton continued to pressurise Ilkley and created multiple chances to score. The most noticeable among these was a drilled cross into the six-yard box, which would’ve landed right at the feet of a Carlton striker had it not been for a heroic block from James Nightingale.

Despite this, Ilkley were slowly gaining a foothold in the game, and were presented with a goalscoring opportunity. A through ball was played towards Tom Smith, who had just the keeper to beat, but his final touch was too heavy, and the goalkeeper sprinted out to collect the ball fractionally before Smith. This was an opportunity squandered, and the hosts went into the break with a one goal deficit.

Ilkley pulled back the deficit in the 50th minute when Smith received the ball out on the wing, then dribbled down the line before playing a perfectly weighted cross. Harry Brown took it in his stride and sent the keeper the wrong way with his close-range shot.

However, the visitors were eager to regain their lead, and almost did when Anees Younis’ powerful shot on goal was destined to nestle in the bottom corner but was brilliantly palmed away by Montague-Millar to keep Simon Armstrong’s men in the game. Shortly afterwards, Ilkley took the lead when a looping cross was met by the strong head of centre-back Adam Davey.

Ilkley were now in cruise control and a wonderful attacking move from Tom Fleming, Brown and Smith should’ve added a third goal to their tally, only to be disallowed for offside.

Things turned from bad to worse for Carlton, as Ilkley sub Charlie Nixon made a run into the box before being brought down by Carlton’s captain Andy Payne. He was subsequently recieved a second yellow card.

Carlton also had a player sin-binned for the remainder of the match, meaning that the visitors would have to play the final 10 minutes with just 9 players. Smith calmly dispatched the penalty as his shot rippled the net.

With five minutes to go, Richard Bull recorded his first goal of the season in spectacular style when he muscled his way through the Carlton defence, before laying the ball off to Smith, who returned the ball to Bull, whose rocketed shot travelled across goal into the bottom corner.

In the dying moments of the game, Nixon also picked up his first goal of the season. He received possession on the edge of the penalty area and neatly slotted the ball home to record Ilkley’s fifth goal of the game.

This result keeps Ilkley’s hopes alive in all three of the competitions.

Today’s result means that they advance into the quarter final of the West Yorkshire League Cup, whilst later this month they will face Tadcaster Magnet in the semi-final of the West Riding County Cup. 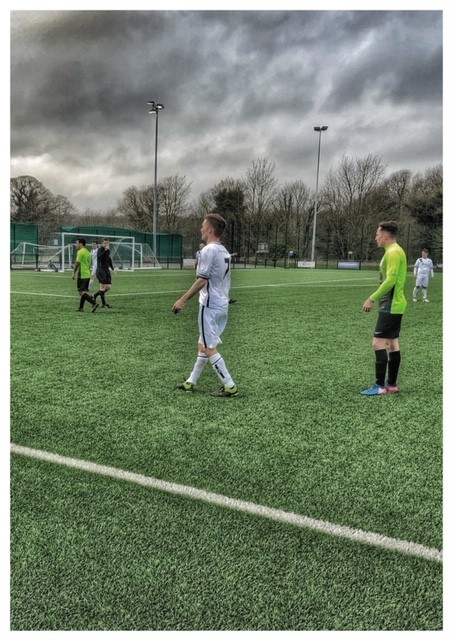