The Bah’tatters promoted to the North West Counties

Ilkley Town will be promoted to the North West Counties division for the first time in their history for the 2021/22 season.

This means that the club, which were founded in 1995, 26 years ago, will also be turning semi-professional for the first time.

Social Media Manager Evan Seaman spoke to club chairman Richard Giles and head of football Simon Armstrong about the implications for the club.

Will the club be looking to increase the amount of sponsorship deals for the matchday income next season going into a higher division?

RG: We are proud of our partnerships with local businesses. Our current sponsors have helped us achieve our goals and we help to promote the sponsors to our members and supporters. The relationships we have with the local business community are throughout the club from the juniors, girls, and women. The support we receive helps us across the whole club.

Looking ahead the men’s first team’s promotion puts us in a bigger stage. This creates some new and exciting opportunities for local businesses to get involved. There are some mouth-watering fixtures such as Bury FC and entry in the FA Vase which will create a lot of interest.

Paul Wintersgill looks after our relationships with corporate partners. He would be pleased to hear from any business interested to discuss our approach paul@ilkleytownafc.co.uk.

After trying to get promoted for a few years, the club have finally done it. What does it mean for the club?

RG: We are delighted to be promoted to the highest level for any team from Ilkley ever. We are a community club. All parts of the club are thriving from the juniors to the first team.

Promotion for the men’s first team is an important step. It increases the profile of the whole club and the town itself. It has created a buzz and sense of excitement for everyone involved with the club and in the town.

After playing in the first team yourself a few years ago, are you excited for the players about this new challenge?

RG: That is a long time ago! I was telling some of the current players that this has been a long process that we have been working on for 20 years or more. Every year we aim to get better, and this has served us well. Many people have contributed to this achievement and everyone has played an important part.

For the current players it is incredibly exciting. It is an opportunity to test themselves at the next level. They are quick learners and playing against better players will challenge them to get to the next level.

Are you looking forward to playing in the qualifying stages of the FA Cup with semi-pro teams being allowed to enter the competition?

SA:It is certainly exciting to be entered into a national F.A. competition. We will be the first Ilkley based team to do so, meaning when we have our first F.A. Vase fixture it will be an historic moment for the club. I am certain it will be very different to anything we have experienced before, but also something we will both enjoy and savour.

In addition to that we now move County Cup competitions and could draw the likes of Farsley Celtic or Guiseley, which again is incredibly exciting for the football club.

Overall, we are all delighted to have been promoted and are very much looking forward to the challenges ahead.

As the team moves into a new division, will there be a change in their facilities, for example turnstiles if they are now charging for games?

SA: We have already taken care of the necessary work for our promotion to step 6. This includes refurbishing the changing rooms, officials’ rooms & spectator toilets, building a covered stand, installing a refreshment kiosk and pay booth.

With that all in place our attention now turns to fine tuning the spectator experience and identifying ways we can improve it. One key addition during the 21/22 season will be a seated stand, with our planning application for 300 seats on the verge of being accepted.

The first match for Ilkley’s new season will start on the 31st of July 2021. 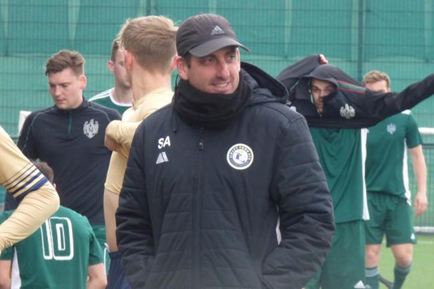